Tutkihankintoja.fi is a service that allows citizens, companies and interest groups to explore the Finnish government spending. It provides information on state spending for goods, supplies and services down to the purchase order level.

For the first time, all this information is available in an online service. Tutkihankintoja.fi improves transparency in the use of public funds and provides information on the market to companies.

The state spending data comprises of close to one million lines of spreadsheet data annually. In this format, the data is pretty much useless to the average person.

We quickly realised that our design process should revolve around making this big data easier to process. We wanted to break it down to more manageable chunks so that an actual human being would understand it. On the other hand, we also wanted to build tools for those that wanted to dig deeper into it.

Right from the beginning, we defined our design goals as such that any average person would need to be able understand what they’re seeing almost instantly. In other words, if we showed the UI to any random person at a bus stop or cafe, they’d have to be able to get a grasp of the data right there and then. A design driver many times forgotten if you look at some of the other government-funded tools out there.

An interface to simplify

The goal of the UI was from beginning on to serve complex data to the user in bits and pieces that are easily digested without the need for excessive head-scratching. On top of that, we created levels in the UI: right from the high-level summaries all the way to the deepest layers of the rabbit hole. If you want a quick overview at a glance, you got it. If you want to dig deep into single purchase orders, you got it.

Navigation allows you to explore state spending by buyer, supplier or procurement category - and you can go as deep as you want, right down to actual euros and cents of any purchase.

We also built powerful filtering tools that allow users to ask questions such as “how much money is the Ministry of Justice using to buy ICT services from Company X” or “from whom is the Finnish Immigration Service buying the most services and what are they” and actually get answers to them.

So it’s really up to the user to decide how they want to use the service.

We think that is what a great service should be all about. 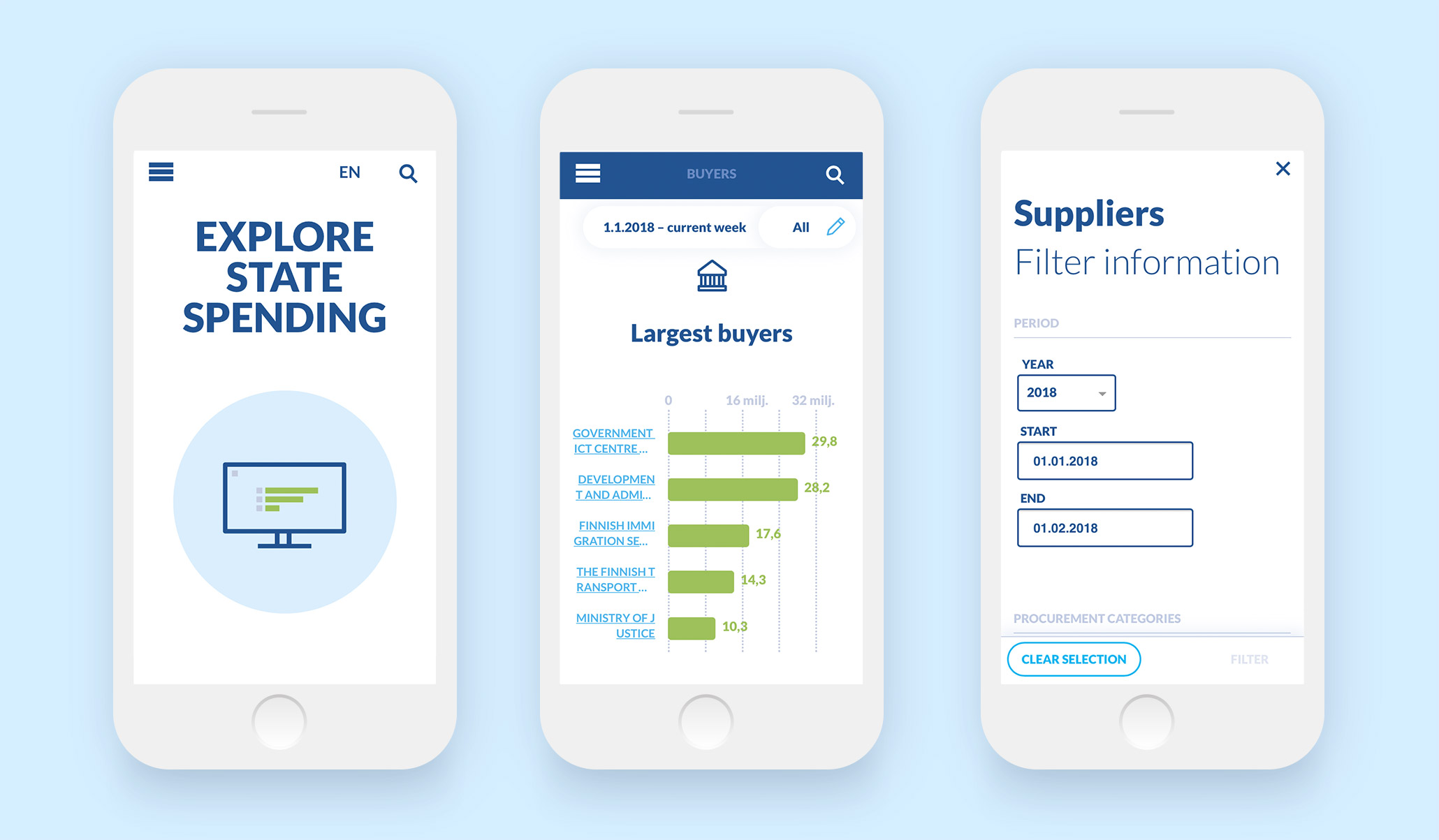 An ode to transparency

Since the site's publication in September 2017, Tutkihankintoja.fi has received a significant amount of positive feedback from citizens, different governmental organisations, private companies and media.

For governmental organisations, the biggest advantage of Tutkihankintoja.fi is that all information is now easily accessible on one website. Earlier, the information on state spending was scattered and accessible only by request. This improvement has been welcomed with open arms.

Some governmental users of the service have pointed out that it is easier to study their own spending from Tutkihankintoja.fi than it is from their own internal systems.

Users have also credited Tutkihankintoja.fi for the possibility to generate comprehensive general views from different perspectives. For example, it is possible to study who are the biggest suppliers of the government, and how much has been bought from them on a particular time period. The possibility to track procurements down to the invoice level has been used actively.

The average visit duration on Tutkihankintoja.fi is 3 minutes and 35 seconds, and on average, a visitor clicks through 5,15 pages on one visit. These analytics suggest that visitors are able to utilize the analyzing tools the site offers and benefit from its contents.

Tutkihankintoja.fi has been presented abroad in several occasions by civil servants of the government and has received appreciation and curiosity. Some organizations have contacted Hansel afterwards to be able to hear more about the service and about the process how this was made possible in Finland. One of these occasions was an OECD meeting in October 16, 2017 under the theme "Measuring Procurement Impact - Implementing Metrics to Measure the Contribution of Public Procurement".

The service was demonstrated by Hansel to EU Member States as part of the EU Commission's best practice workshop about open contracting information on 13 March 2018. The service was also presented to commission representatives in October 2017 during a workshop organized in Helsinki on eProcurement.

In the end of August 2017, a few weeks before Tutkihankintoja.fi -service was officially launched, it was introduced to the citizens as a part of an open administration (Avoimet ovet) event. The event was organized in several governmental agencies simultaneously and as a part of Finland's 100 years of independence celebration. The prime minister of Finland at the time, Juha Sipilä, visited the Tutkihankintoja.fi -stand and took a moment to study the websites data.

Different media outlets have picked up the service and utilized it from various perspectives.

Kauppalehti emphasized it's perspective to individual companies and highlighted firms that operate for example in the fields of immigration and infrastructure: Read more at Kauppalehti

Ilta-Sanomat pointed out that the state makes its biggest purchases from its own companies: Read more at Ilta-Sanomat

Time of digital transformation is here. Focus on a smart digital strategy and the digital leap that follows, ensure your companys' competitive edge now and in the future.

A good service experience requires relevance, functionality and ease of use. The experience is topped off by a touch of digital magic.

OmaSATO – Your home in the pocket

OmaSATO is a service for all residents of SATO apartments. It is a web service, providing residents with a variety of features.