In traditional data integration, integration acts as an interpreter and postman between systems: systems are brought together and can exchange information in a form that both understand. System integration manages data flows at the enterprise level, but still stays at the system level: What information needs to be transported to other systems in order for people to do their jobs? When organization moves to look at the big picture, we start talking about process integration or business process automation (BPA).

In process automation, thinking starts with a use case: What is the goal? Who are the users? What systems do they use and at what stage? Can people's actions be replaced by automation? Are there certain points in the process that require (within the law or otherwise) human intervention? How often does the process run and what triggers it? Automation reduces the possibility of human error and processes are speeded up when unnecessary waiting for user response is eliminated. At the same time, employees are freed up to do more productive tasks instead of boring manual work.

If you can't describe what you are doing as a process, you don't know what you're doing.

Let’s take an example from real life: all people have to eat, and a well-fed worker is often nicer than a hungry one. For this reason, many workplaces offer cheap meals in restaurants in office buildings, where meals can be paid for with a key card and the lunch price is deducted directly from salary. Prior to automation, the company controller received an invoice from the lunch restaurant in their email once a month and manually entered all meals of the month into the payroll system. The work is slow, and the possibility of errors is obvious (especially if the controller has missed lunch and blood sugar is low).

As the lunch is paid with the key card, the access control system can provide a breakdown of the upcoming lunch report with the names of the employees as well as the number of lunches with dates in the agreed format. Instead of a controller, it can be received by an integration. A more modern business center might even have an API to query the lunch invoice attachment, but even more traditional options such as email attachments can be handled automatically without intervening people. In the integration, the invoice attachment is reviewed, and for each employee, the information is enriched from the company’s user database so that each meal can be reconciled correctly in the payroll system. The enriched data is exported to the interface of the payroll system and lunch meals end up on the payroll receipt automatically and calculated according to predefined formulas. People are only needed in the process in special cases that cause errors. An example of an error case could be an employment relationship that ended in the middle of a month and the employee's passivisation in the user database. 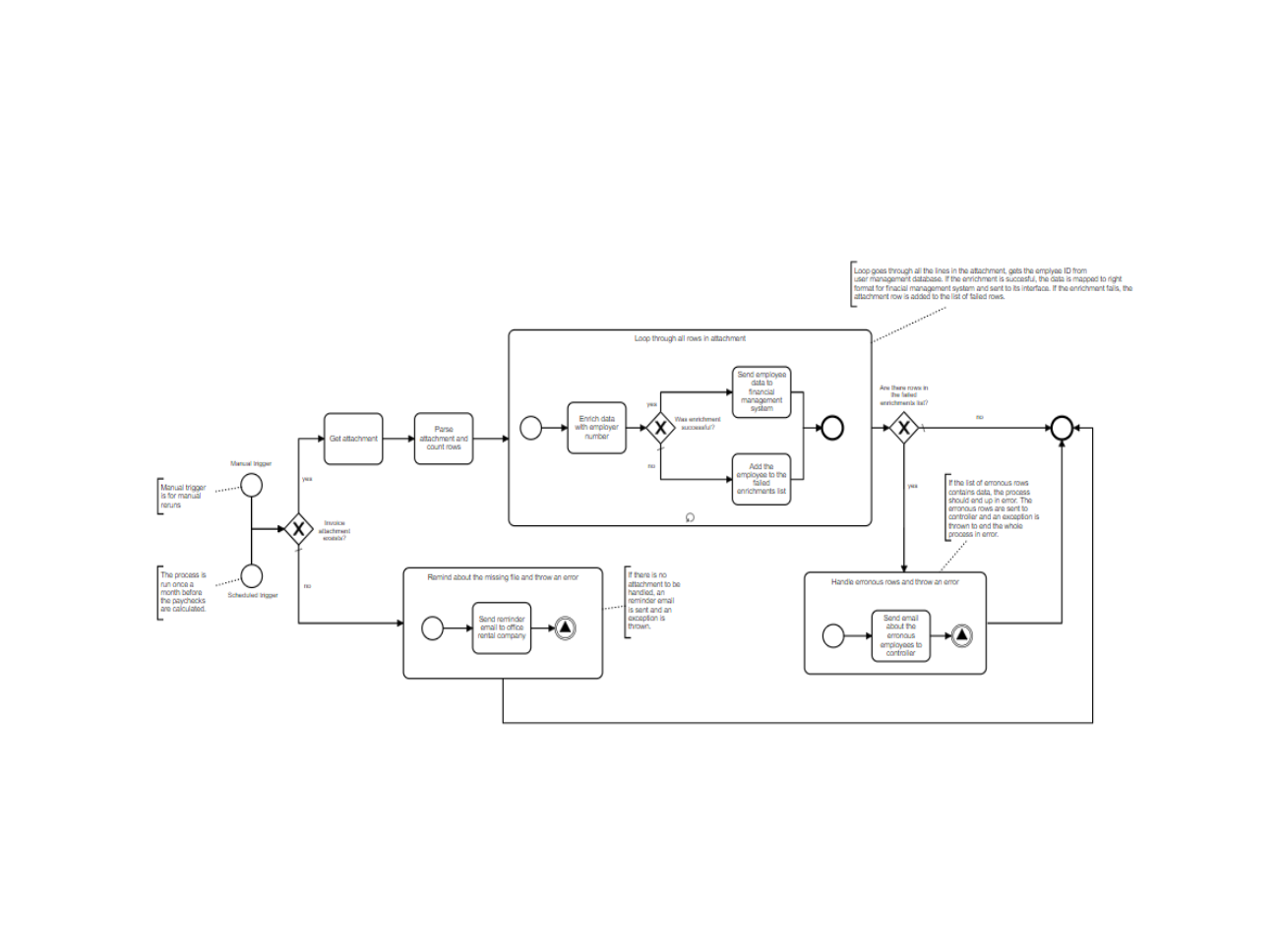 Similar processes used in every company include the creation of a new employee and the passivisation of the outgoing employee in the systems, which has become increasingly important during the GDPR period. There is a lot to automate in financial management in general. In addition to these, there are business-specific processes in all sectors that can be automated to enable companies to streamline their operations.

RPA is an easy way to automate repetitive routines. The word "robot" in “RPA” refers to a software robot that simulates the actions of an individual user on user interfaces. In hyperautomation, the recordings made with the robot are orchestrated on an integration platform. That is, RPA functionalities are not separated from the integration layer, but are efficiently run from there as a seamless part of the whole process. RPA is needed if the system does not have proper interfaces or their use is not cost effective. In this case, the input required for the integrations is produced from the user interface with a recording. 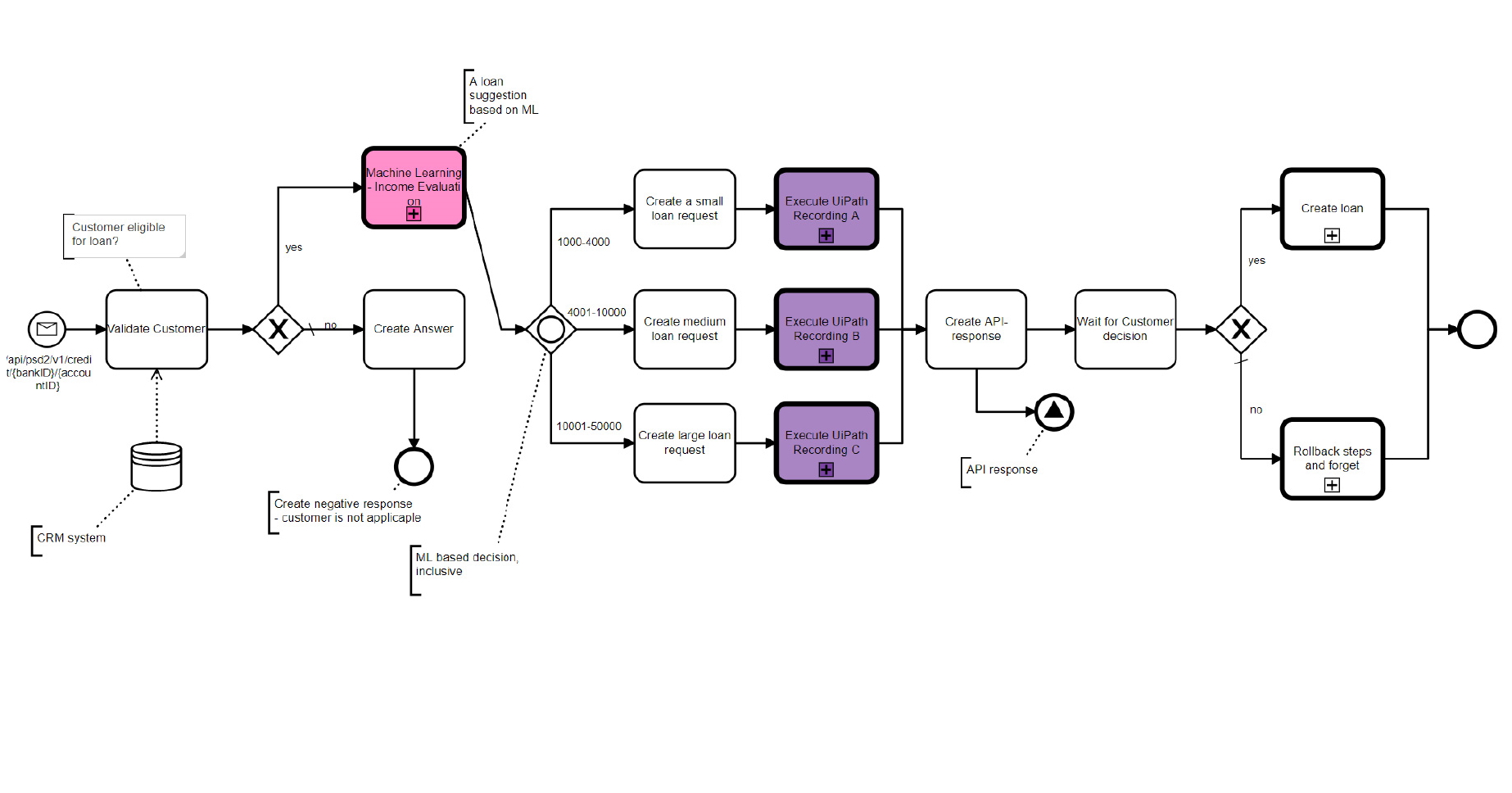 Artificial intelligence in hyperautomation or intelligent process automation is used to make decisions based on available data on behalf of people. An example of such a decision could be automatic price changes based on sales and margins: during the corona era, demand for kettle bells would increase. An online store specializing in sports would automatically raise their kettle bell prices and move lesser-selling swimwear to the sale basket. In this case, the trader could ensure the best possible margins and the lowest possible loss by automation.

Business process automation brings systems together at the process level, automating work flows and logical reasoning. It enables B2B integrations and monitoring of the entire business process with the required accuracy, reducing costs in both the amount of work and the calendar time used, while creating better and more consistent quality without human error. In hyperautomation, unnecessary human involvement in the process can be further reduced through robotics and artificial intelligence.

Team leader, integrationsThis weekend warrior has been working with integrations for 16 years.